Propecia (finasteride): Propecia is a prescription medication approved by the United States Food and Drug Administration (US FDA) originally as a prostate gland shrinking medication, however in 1998 it was also approved at a lower dosage as an anti-baldness treatment. It is sold as a prescription prostate medication in 5 milligram tablet form under the brand name Proscar. For treatment of hair loss it is sold in 1 milligram tablets under the brand name Propecia.

5 milligram finasteride tablets have been approved as a safe and effective for treatment for prostate enlargement because it has been shown that finasteride effectively blocks the enzyme that converts testosterone into a form that enlarges the prostate gland. It was discovered that the same form of testosterone that is responsible for some prostate gland enlargement, also plays an important role in signaling certain genetically predisposed hair follicle cells to miniaturize, eventually leading to hair loss. By blocking the conversion of testosterone from one form to another, Propecia helps stop hair loss, and in many cases regular Propecia use actually results in significant hair regrowth.

It is significant to note that the hair loss reduction effect of Propecia occurs even at a much lower dosage than that needed to treat enlarged prostrate glands. A single 1 milligram Propecia tablet (finasteride) taken daily is the usual prescribed dose for hair loss treatment. Over time, some patients find that in addition to halting hair loss, they actually start to regrow hair that had recently been lost. Dr. Panagotacos prescribes finasteride treatments for certain of his hair restoration patients. This patient illustrates an exceptionally positive response to finasteride treatment. Typical results are less pronounced.

Clinical evidence suggests Propecia works to slow the rate and degree of hair loss, and in some cases reverse hair loss, in the following manner:

Propecia stops pattern hair loss: Tests have shown that Propecia treatment prevents miniaturization of hair follicles, and thereby stops hair loss. Finasteride prevents the aging of hair follicles and helps men keep the hair they have. In one two year study, 83% of men taking Propecia maintained their hair at the top of their heads (vertex area), compared to 28% of men taking a placebo (Blue bars). In the same study, 17% of the men taking Propecia still experienced measurable hair loss, but 72% of the men taking the placebo also experienced additional hair loss (Red bars). After the first two years, results of the group taking Propecia continued to improve. 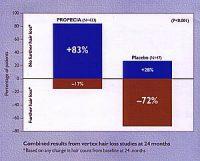 Safety: A level of safety has been established for finasteride for many years before it was approved as a hair loss treatment. As a prescription drug already approved by the FDA for treating enlarged prostate glands, it has been extensively researched and tested. Based on studies of hormone breakdown products found in the urine, it seems to affect only the 5-alpha-reductase enzyme, and not hormones. Propecia is not an antiandrogen.

Finasteride is approved as safe and effective in tablet form for treating some forms of enlarged prostate gland. It has been shown to be effective at stopping hair loss when taken by mouth in table form at much smaller doses than that used to treat enlarged prostate.

Beneficial side-effects: Some possible side effects of finasteride treatment for hair loss may be seen as beneficial, such as the shrinking of the prostate gland in men susceptible to an enlarged prostate.

Men only: Propecia is for men only, and is not approved by the FDA as a hair loss treatment for women or children.

Pregnancy: Women who have become pregnant while taking finasteride should immediately discontinue the finasteride treatment. If treatment is continued, finasteride may cause a male fetus to develop ambiguous genitals, and have female characteristics.

Less sex drive: Finasteride treatment may cause a loss of sex drive in 1-2% of patients as a result of reducing levels of DHT circulating in the blood. Treatment with Viagra can be helpful in these cases.

Reduced ejaculate: There is a risk of reducing the volume of ejaculate by up to 20% if the prostate gland is reduced in size, as a result of finasteride treatment. Sperm activity remains normal.

Finasteride by mouth: A single one milligram Propecia tablet is typically taken by mouth on a daily basis.

Finasteride topical lotion: Finasteride lotion is not commercially available, however Dr. Panagotacos does offer this treatment mixed with other medications to block DHT to certain of his patients, and an examination is required for a prescription. Applying the lotion is not as effective as swallowing the tablets. Grinding up finasteride tablets to make a lotion will not work, as finasteride does not dissolve easily. Topically applied finasteride is reserved for use by those who wish to block only 5-10% of the DHT activity in the scalp, which is a lower level than typically achieved from ingesting tablets. Finasteride lotion must be specially prepared by a Pharmacologist or Medical Doctor specializing in medical hair restoration.

The story of finasteride begins with scientists who were working with certain Dominican Republic people who had a genetic trait that caused them to give birth to male children with ambiguous genitalia. Female babies were not affected. In many cases it was difficult to determine such an infant’s gender by observation alone. At puberty, when hormone levels in these affected individuals increased, most of these young boys normalized. They eventually had children of their own, and perpetuated the genetic trait.

No hair loss: It was also observed that the adult males in this group being studied never suffered enlarged prostate glands, never developed prostate cancer, nor did they lose their hair. No male pattern hair loss! Genetic research showed that their gene for producing the 5-alpha-reductase enzyme was inactive. With no 5-alpha-reductase enzyme, testosterone was not readily converted to DHT.

5-alpha-reductase regulation: Scientists figured that if they could create or find a medication to regulate the activity of 5-alpha-reductase they could accomplish some of the positive effects of this genetic trait, such as prostate gland normalization and hair loss prevention.